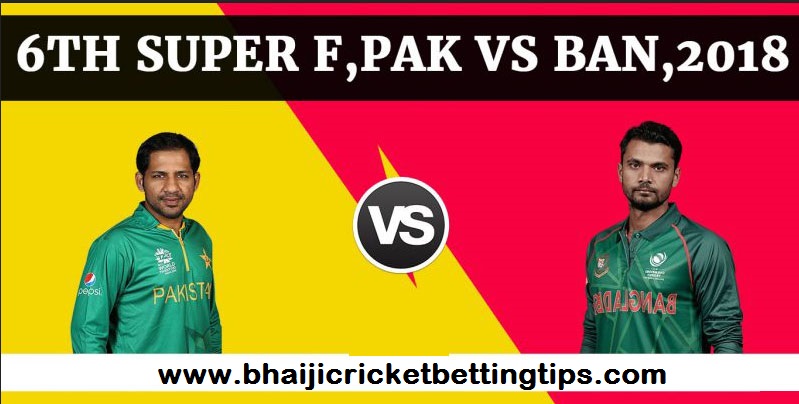 Today is the final of the super four matches of the Asia Cup 2018. The two teams which are going to confront each other are Pakistan and Bangladesh at  Sheikh Zayed Stadium, Abu Dhabi. This is the second semifinal and the team who will come out as a winner they will play final with Team India on Sep 28th. Now, we will have to wait for the second finalist team of Asia Cup 2018 till the match ends.

Head to Head
Pakistan and Bangladesh have encountered each other 13 times in Asia Cup and 12 times it all goes to Pakistan favour. So, it’s an alert for Bangla Team to really tie up their shoelace if they want to play Finals. In a game like a match of Asia Cup 2016 Semi Final match Pakistan was knocked out by Bangladesh but eventually they lost in finals against India and missed the opportunity to take the Asia Cup trophy home. This is interesting to watch will Bangladesh convert it into success and move one step ahead to Asia Cup 2018 Trophy.

Pakistan
There is a lot of pressure on Team Pakistan for winning this match otherwise, they will be out from the tournament. Already they have lost two matches against India and will miss the take a revenge if they did not get qualify for the finals. The top order will mainly focus on the Fakhar Zaman, Imam-ul-Haq and Babar Azam. Shoaib Malik is playing well in the last match, he scored 78 runs so he needs to play a safe game and score big for his team. A team has also hope from the Captain Sarfraz Ahmed and Shan Masood. There is probable chance to select Junaid as he is waiting and not played a single match in the Tournament. The spinners include the likes of Shadab Khan and Mohammad Nawaz while the pace battery will be lead by Hasan Ali.

Bangladesh :
The team really deserve appreciation for winning a thrilling match against Afghanistan who was going well in the Tournament. They made a come back after their back to back losses against Afghanistan and India respectively. It is the very crucial match for the team as they are near to trophy and have to give a winning performance with a proper coordination of the team players as well mind.

The bowling attack department will be handled by the bowlers Mashrafe Mortaza, Mehidy Hasan, Mustafizur Rahman and Rubel Hossain.

Our Prediction: Pakistan will win this match. Stay tuned with Bhaiji and get the betting tips and prediction for Pakistan vs Bangladesh Super Four match. You can also get the accurate betting tips for the Finale of Asia Cup 2018, so you can predict and win with us.