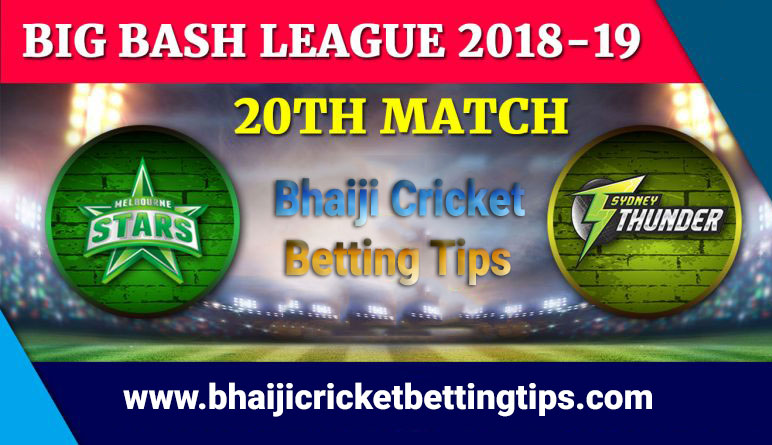 The 20th match of Big Bash 2018-2019 is going to be held between Sydney Thunder vs Melbourne Stars at Carrara Oval in Queensland.
Head to Head
Previously, the teams have played nine matches against each other in Big Bash League, in which six matches were won by Sydney Thunder and three by Melbourne Stars.
In the recent clash on 21st December, the Thunder won the match by 15 runs, although rain-affected game, the Thunder scored 81/5 and then restricted the Stars at 74/6.
Sydney Thunder
As far in the league Thunder have faced Melbourne Stars 5 times and have beaten all the times including their opening match. This would definitely be an advantage for the team Sydney. Looking at the team performances, Jos Buttler is rocking through his bat and at the second position in this season in terms of scoring runs. Captain Callum also making all his effort to contribute in the team success and win. Team expecting from Joe Root and Shane Watson to play their part and these two will be eager to score big against the Stars.

On the other side, the bowling department consists of key players Daniel Sams and Fawad Ahmed, took eight and six wickets respectively. Meanwhile, Chris Green, Sam Rainbird, and Jonathan Cook have additionally had their impact in progression and have picked three wickets each and they will hope to develop the pressure from the opposite end.

Melbourne Stars
Melbourne had not a good start to this season campaign, but now they trying hard to manage to make a come back in the league.

Marcus Stoinis has become the new hope for the team and they are expecting some good runs from his bat. While captain Glenn Maxwell has additionally been in great touch, these two will lead the charge against Melbourne Stars. Nick Larkin is also a good option for the team. If he would score some decent runs from his bat.

The absence of Sandeep Lamichhane is a major blow for the Stars as the Nepal sensation was their best strike bowler up until now and they will surely miss his game against Thunder. Scott Boland and Adam Zampa are their next best alternatives in the side and these two have shared seven wickets between them up until now. They will be supported by the captain to fix the fastens in the middle.

Bhaiji, India’s best online cricket betting tips and prediction provider. The team Bhaiji brings you accurate betting tips and Prediction for Big Bash 2018-2019, to make your cricket experience for exciting. You can subscribe to our paid services to get more accurate and result oriented cricket tips for BIG BASH08.