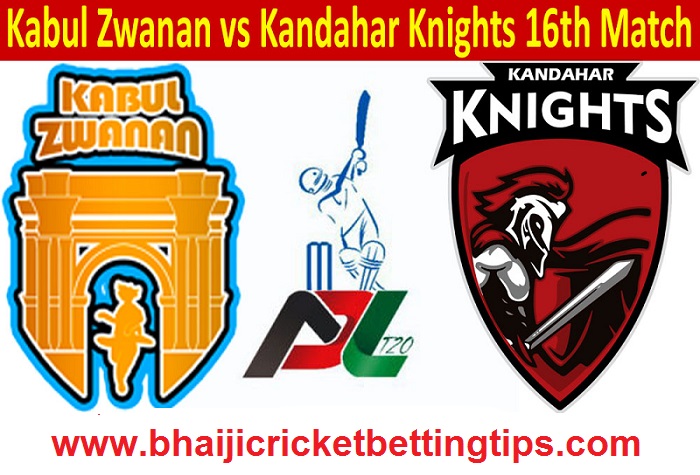 The 16th match of the Afghanistan Premier League, 2018 is set to play between Kabul Zwanan and Kandahar Knights on 16th October at Sharjah Cricket Stadium, Dubai, UAE.
Yesterday, Hazratullah Zazai made a history and become the first player of Afghanistan hitting 6s in an over. The Kabul Zwanan batsman made this record against Abdullah Mazari in the fourth over of the Afghanistan Premier League clash against Balkh Legends and registered his name in the history of 6s in an over after Garry Sobers, Ravi Shastri, Herschelle Gibbs and Yuvraj Singh in the elite list. Like Yuvraj who had hustled away to a 12-ball half century, Zazai too accomplished the equivalent on Sunday (October 14), turning into the joint quickest to the milestone alongside Yuvraj and Chris Gayle.

They opened their winning account on 13th October in the match against Nangarhar leopards and won by 26 runs, and they have lost last four matches and are at the bottom in the score table. Now, if they want to continue in the tournament, they must have to win this match and their upcoming matches. That is the only possible option for them to qualify semifinal, their one defeat led them out of the competition.

As far the team as performed so so cricket, out of 6 matches they played have won 3 wins and 3 losses. It is like they have shown only have of their caliber but can give much better cricket game performances and have potential to possess a good position in the tournament. Zwanan had lost their last match against Balkh legends by 21 runs and now they have pressure for winning this match against Kandahar Knights.

Looking upon the team performances and analysing the several other factors of this match our experts have predicted that Kabul Z wanan will win the match. Stay tuned with bhaiji and get all the latest news and prediction for Kabul Zwanan vs Kandahar Knights. You can also subscribe to our paid services for more accurate betting tips and prediction for all matches of APL 2018.