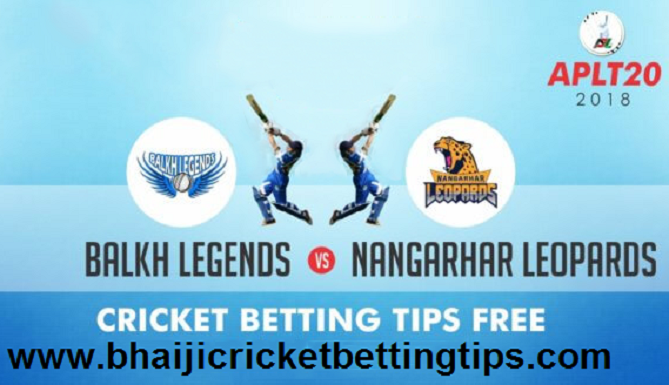 Head to Head
On 11th Oct in Balkh Legends vs Nangarhar Leopards, both the teams confronted each other in which Legends beaten Leopards by 25 runs.

The team is performing outstanding cricket, and they have most chances to win the first ever trophy of APL 2018 if they will continue to give match-winning performances. Team is comprised of great overseas players like Chris Gayle, who hitted ten sixes in his 48- ball  80 as the Legends posted 244/6. Dilshan Munawara and Tariq stanikzai soul of their batting department and on the other side the bowling department having Ben Laughlin, Aftab Alam, Qais Ahmed and Abdullah Mazar, other than that all-rounder players like Ravi Bopara Captain Mohammad Nabi a right-handed batsmen and right arm off breaker are the spirit of the team. They just need to balance their game as they doing and definitely they will be playing finals.

They are at second last position in the score table and they have lost five matches out of Seven, the last match they lost against Paktia Panthers. It will be their final match. For Nangarhar Leopards, Anton Devcich remains their key man hit two half-centuries, team have some positive bowlers like Ben Cutting’s took 8 wickets in his first two games, also they have quality spin bowlers among them Mujeeb Ur Rahman’s is playing well last time  1-32 last time out took him to ten wickets in his last four games. He took 4-16 in the previous match. Sandeep Lamichhane Nepalese spinner marked his debut with 2-23 from four overs, having arrived from the World T20 Asia Qualifier where he took 24 wickets in six games, can be a worthy player for the team.

Looking upon the team performances and analysing the several other factors of this match our experts have predicted that  Balkh Legends will win  the match. Stay tuned with bhaiji and get all the latest news and prediction for Balkh Legends vs Nangarhar Leopards. You can also subscribe to our paid services for more accurate betting tips and prediction for all matches of APL 2018.