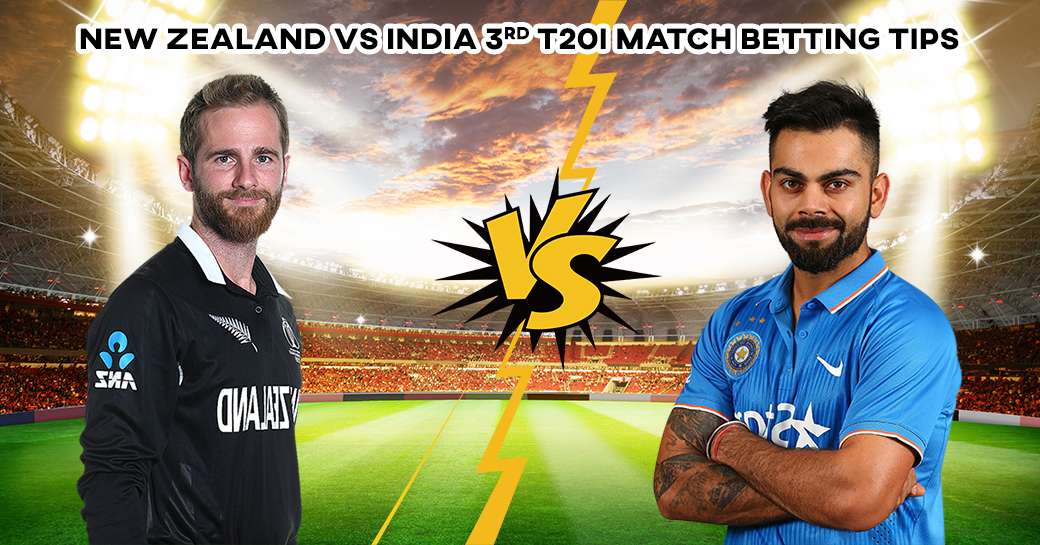 New Zealand and India are going to play in the 3rd T20I match of the 5-match series. Seddon Park, Hamilton is the venue of the match. With the 2-0 lead in this series, India starts favorites in this upcoming match. And they have a great chance to clinch the series with two matches remaining.

New Zealand have played some of their worst cricket at home recently. Especially their bowling attack has performed abysmally with the Indian batting order smashing them to all parts of the ground. But still, New Zealand has top-players in their squad that can turn around their bad form very quickly, so it's not all doom and gloom for their team just yet.

At Seddon Park, Hamilton, captains generally decide to chase down targets because the pitches here assist the batsmen in good stroke play throughout a T20 match. You can get more such information for betting purposes by availing the cricket betting tips free from Bhaiji.

New Zealand has been an out of form team in all formats of cricket. They haven’t won any international match for nearly two months.

In this ongoing series, the bowlers of New Zealand have failed so far as a group collectively. The most experienced bowler Tim Southee and Ish Sodhi have bowled very poorly. The margin of defeat could have been even bigger for New Zealand if it wasn’t for their batting unit performances. Ross Taylor and Martin Guptill have scored decent runs in this series to ensure that New Zealand had a competitive chance in the first few matches.

New Zealand players have to learn from their mistakes very quickly and start to perform to the best of their ability to keep this series alive against India.

India has performed exceptionally well in T20I Cricket with consistent wins over the past few months. They have continued their form in the ongoing series with dominant victories.

The top players of India team have performed exceptionally well in this series. KL Rahul and Virat Kohli have been the consistent players with the bat for team India. Meanwhile, with the ball, it's the combination of fast bowlers and spinners namely Jasprit Bumrah and Ravindra Jadeja bowling very economically and taking consistent wickets.

India has all the momentum going into the upcoming match but they can take New Zealand likely due to their well-known credentials of making strong comebacks.

Players to watch out for India are Rohit Sharma, KL Rahul, Jasprit Bumrah, and Yuzvendra Chahal.